It was a late Saturday afternoon in Harlem and I’m walking down on FDB (Fredrick Douglas Boulevard) towards Central Park. I’m quite late (about several weeks Late) to brunch but I’m in no hurry as it is only a little bit after 3pm, and I still have about three quarters of an hour before brunch ends at RENDEZVOUS HARLEM. Now I first stopped in for a drink about two months ago (Chardonnay of course) while walking by with a friend who spotted two of her former co-workers sitting on the patio at this modern French bistro, and we decided to join them for a spell.

I was very taken by the chic interior design inside, and the Chardonnay was better than most places in Harlem these days, so I gave my card to the manager Joseph and told him that I would return in a week or two and do a review on the food.  Joseph told me that he would love for me to return and review the brunch, after giving me the bad news that they just ran out of Chardonnay. Well after the Fashion Week madness, and other reviews, as well as scheduling conflicts I find myself returning to keep my word.

I walk in and head toward a table on the far left of the restaurant, and Joseph walks over to greet me while giving me that “I’ve seen you somewhere before” look. So I say to him “you do remember me, don’t you?” and handed him my card. Immediately he recognized me and said “Welcome back Monsieur Strange! It’s been awhile?” Indeed it has I told him, things have just been a little crazy I explained, but being a man of my word I am now here for the review. Joseph bids me to sit at a place of my choice, so I sit at a table where I can see everything (at the far left) and he brings me over a glass of Champagne and a brunch menu.

I scan the brunch menu and decided to start with the HOME SPREADS: olive tapenade, eggplant caviar, and sundried tomato pesto which is served with bread.

And for the main, I chose the “BENEDEICLICIOUS” their take on the eggs benedict, which is two poached eggs over brioche on ham with hollandaise sauce, and served with home fries.

The eggs benedict was quite delicious, (I must admit) which is sort of a brunch stable for me when I brunch, but instead of the traditional “English Muffin” the poached eggs and tasty ham slices was placed on top of a very thick piece of garlic brioche bread, which played upon my palette with tangy delight. In fact the brioche bread was so thick, I had a bit of difficulty stuffing it into my mouth, and made a little bit of a mess on my sports jacket, but I didn’t mind at all as I already did that with the home spreads. Out of the three home spreads, I enjoyed the olive tapenade and the eggplant caviar the most, however do not think that the olive tapenade was not good as well, for it definitely was.

As I was enjoying this fabulous meal and cozy atmosphere, I noticed that the wax paper in my bread basket was a facsimile of a French newspaper, so I removed it from the metal basket to take a closer look at it. It was such a wonderful prop that for several minutes I actually thought that I was sitting in a modern quaint bistro in Paris.

My French is not what it was when I was 14 (I could actually hold a conversation then) but I did my best, and it was a very welcoming addition to my dining experience, and added a little “Je ne sais quoi” as I continued to have my palette stimulated by this dish that I had so many times before, but felt like the first time.

I also took a few moments to observe the other patrons seated in the bistro, and they seemed to be having the same relaxing experience that I was having, you could just tell that they were quite satisfied being here. 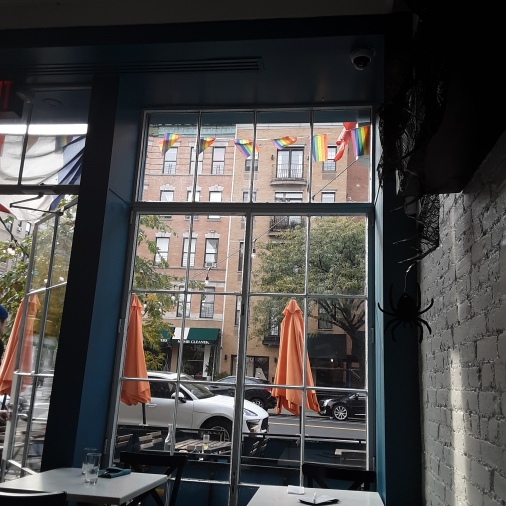 After I finished my phenomenal meal, I ordered a glass of Chardonnay to kick back at my table and enjoy the view of the interior (and from the lovely window) of this very relaxing albeit small, but comfy restaurant, and that’s when Joseph presented me with a treat in the form of a Crème Brulee!

A fitting ending to my brunch experience at Rendezvous. Every part of my meal was made to perfection (along with great care and love) as I could not find one single flaw, (Yes I looked, I’m a restaurant critic!) in the food, service, bathroom, or beverages so I have no choice but to give this French bistro very high marks along with my upmost recommendation. Joseph (the general manager) was very on spot with a glass of seltzer water and a napkin to clean off my jacket, as I mentioned before about the mess I made of myself. The charm and professionalism of Joseph, and in fact the whole staff is something to aspire to, even the busser was quite a gentleman.

The food here was so good that I asked if I could look at the dinner menu, and was very pleased with what I perused. Returning here to review the dinner menu is an absolute must! This place has such a romantic vibe during the day, I can only imagine what that would be like at night for dinner!

Now I could go on and on about how much I liked and enjoyed this place, the food, and the excellent performance of the staff…….. So in closing I will just say Bonsoir!

Rendezvous is located at 2072 Frederick Douglass Boulevard in Harlem.