All Hallow’s eve (Halloween) has always been a holiday filled with mystery, magic and superstition. It’s ancient beginnings as a Celtic end-of-summer festival during which people felt especially close to deceased relatives and friends. For these friendly spirits, they set places at the dinner table, left treats on doorsteps and along the side of the road and, lit candles to help loved ones find their way back to the spirit world. 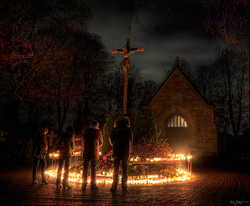 The Druids built huge sacred bonfires, where the people gathered to burn crops and animals as sacrifices to the Celtic deities. During the celebration, the Celts wore costumes, typically consisting of animal heads and skins, and attempted to tell each other’s fortunes. When the celebration was over, they re-lit their hearth fires, which they had extinguished earlier that evening, from the sacred bonfire to help protect them during the coming winter.

“By 43 A.D., the Roman Empire had conquered the majority of Celtic territory. In the course of the four hundred years that they ruled the Celtic lands, two festivals of Roman origin were combined with the traditional Celtic celebration of Samhain. The first was Feralia, a day in late October when the Romans traditionally commemorated the passing of the dead. The second was a day to honor Pomona, the Roman goddess of fruit and trees. The symbol of Pomona is the apple and the incorporation of this celebration into Samhain probably explains the tradition of “bobbing” for apples that is practiced today on Halloween.”

On May 13, 609 A.D., Pope Boniface IV dedicated the Pantheon in Rome in honor of all Christian martyrs, and the Catholic feast of All Martyrs Day was established in the Western church. Pope Gregory III (731–741) later expanded the festival to include all saints as well as all martyrs, and moved the observance from May 13 to November 1. By the 9th century the influence of Christianity had spread into Celtic lands, where it gradually blended with and supplanted the older Celtic rites. In 1000 A.D., the church would make November 2 All Souls’ Day, a day to honor the dead.

It is widely believed today that the church was to replace the Celtic festival of the dead with a related, but church-sanctioned holiday. All Souls Day was celebrated similarly to Samhain, with big bonfires, parades, and dressing up in costumes as saints, angels and devils. The All Saints Day celebration was also called All-hallows or All-hallowmas (from Middle English Alholowmesse meaning All Saints’ Day) and the night before it, the traditional night of Samhain in the Celtic religion, began to be called All-hallows Eve and, eventually, Halloween.

All Hallow’s Eve Migrates to the U.S.

By the 1920’s and 1930’s, Halloween had become a secular, but community-centered holiday, with parades and town-wide parties as the featured entertainment. Despite the best efforts of many schools and communities, vandalism began to plague Halloween celebrations in many communities during this time. By the 1950’s, town leaders had successfully limited vandalism and Halloween had evolved into a holiday directed mainly at the young. 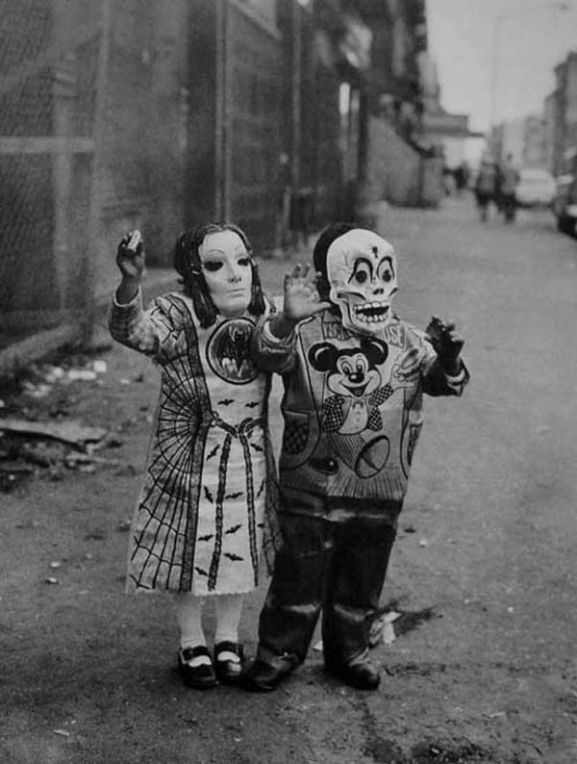 “The tradition of dressing in costume for Halloween has both European and Celtic roots. Hundreds of years ago, winter was an uncertain and frightening time. Food supplies often ran low and, for the many people afraid of the dark, the short days of winter were full of constant worry. On Halloween, when it was believed that ghosts came back to the earthly world, people thought that they would encounter ghosts if they left their homes. To avoid being recognized by these ghosts, people would wear masks when they left their homes after dark so that the ghosts would mistake them for fellow spirits. On Halloween, to keep ghosts away from their houses, people would place bowls of food outside their homes to appease the ghosts and prevent them from attempting to enter inside.”

In the late 1800’s, there was a move in America to mold Halloween into a holiday more about community and neighborly get-together’s than about ghosts, pranks and witchcraft. At the turn of the century, Halloween parties for both children and adults became the most common way to celebrate the day. Parties focused on games, foods of the season and festive costumes. Parents were encouraged by newspapers and community leaders to take anything “frightening” or “grotesque” out of Halloween celebrations. Because of these efforts, Halloween lost most of its superstitious and religious overtones by the beginning of the twentieth century. 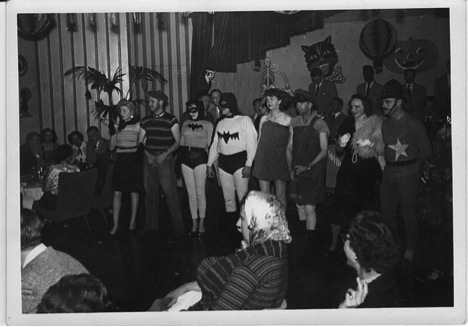 In the second half of the nineteenth century, America was flooded with new immigrants. These new immigrants, especially the millions of Irish fleeing Ireland’s potato famine of 1846, helped to popularize the celebration of Halloween nationally. Taking from Irish and English traditions, Americans began to dress up in costumes and go house to house asking for food or money, a practice that eventually became today’s “trick-or-treat” tradition. Young women believed that on Halloween they could divine the name or appearance of their future husband by doing tricks with yarn, apple parings or mirrors.

“Due to the high numbers of young children during the fifties baby boom, parties moved from town civic centers into the classroom or home, where they could be more easily accommodated. Between 1920 and 1950, the centuries-old practice of trick-or-treating was also revived. Trick-or-treating was a relatively inexpensive way for an entire community to share the Halloween celebration. In theory, families could also prevent tricks being played on them by providing the neighborhood children with small treats. A new American tradition was born, and it has continued to grow. Today, Americans spend an estimated $6 billion annually on Halloween, making it the country’s second largest commercial holiday.”

But what about the Halloween traditions and beliefs that today’s trick-or-treater’s have forgotten all about? Many of these obsolete rituals focused on the future instead of the past, and the living instead of the dead. In particular, many had to do with helping young women identify their future husbands and reassuring them that they would someday with luck, by next Halloween—be married.

Ancient Halloween Rituals: “The ignorant believe that there is no such night in all the year for obtaining an insight into Futurity.”

“Take two nuts and place them in the fire bestowing on one of them your own name;on the other that of the object of your affections. Should they burn quietly away,side by side then the issue of your love affair will be prosperous. But if one starts away from the other the result will be unfavorable.”

Just before retiring to sleep, eat a raw or cooked salted herring, and in your deams your husband or wife that is to be yours , will come and offer you a cup of water to quench your thirst.ting the Herring.

Go three times round a bean stack with outstretched arms as if measuring it. And the third time around you will clasp in your arms the shade of your future partner.

Eating the apple at the glass:

Provide an apple for yourself, and when the clock strikes midnight, go alone into a room where there is a mirror. Cut the apple into small pieces, throw one of them over your left shoulder while advancing towards the mirror without looking back, proceed to eat the rest of the apple pieces, while combing your hair CAREFULLY before the mirror. While thus engaged the face of the person you are to marry will be seen peeping over your left shoulder in the mirror.

“The American Halloween tradition of “trick-or-treating” probably dates back to the early All Souls’ Day parades in England. During the festivities, poor citizens would beg for food and families would give them pastries called “soul cakes” in return for their promise to pray for the family’s dead relatives. The distribution of soul cakes was encouraged by the church as a way to replace the ancient practice of leaving food and wine for roaming spirits. The practice, which was referred to as “going a-souling” was eventually taken up by children who would visit the houses in their neighborhood and be given ale, food, and money.”

“Other rituals were more competitive. At some Halloween parties, the first guest to find a burr on a chestnut-hunt would be the first to marry; at others, the first successful apple-bobber would be the first down the aisle. Each one of these Halloween superstitions relies on the good will of the very same “spirits” whose presence the early Celts felt so keenly. Young women tossed apple-peels over their shoulders, hoping that the peels would fall on the floor in the shape of their future husbands’ initials; tried to learn about their futures by peering at egg yolks floating in a bowl of water; and stood in front of mirrors in darkened rooms, holding candles and looking over their shoulders for their husbands’ faces.”

Any way you look at it, Halloween or All-Hallows-Eve has it’s origins and history steeped in the spirits of the dead, divination, and magic rituals for protection or to secure a glimpse of a future spouse.  But why do we still celebrate this centuries old arcane holiday?

Perhaps Halloween allows us to deal with our shadow-self’s, and affords us an opportunity to gaze and dance with the sexy dark side of our very own nature. So we all hide behind a mask and get to live out that part of the “other” which lurks inside just above the conscious level of our own perception.

Or maybe we just want a chance to see who we are going to marry in the following year!

Spence, Lewis: An Encyclopedia of Occultism.