“Why my dear sir Mr. Kringle, I would have a word with you about your hired help I say.” (Mike Strange.)

Many have been lead to believe only that what they have been told about Christmas, without questioning this yearly rite of worship of the old pagan gods thinly veiled under the quise  of  Christian religion.

Christmas is not all about decking the halls and joy to the world. St. Nick’s “dark servant” (no elf is he), who goes by the name Krampus, is a hairy, horned, supernatural beast whose pointed ears and long, slithering tongue give the naughty something to think twice about. St. Nikolaus (a.k.a. Mr. Klaus) rewarded good children, but the little baddies found Krampus slithering down the chimney. Don’t worry you American and Western European kids, Krampus is mostly found in Northern and Eastern Europe—Germany, Austria, Croatia, Slovakia, Slovenia, and northern Italy. Hmmmmm.

In Old High German, Krampus suggests the word for claw (Krampen). Traditionally, young men dress as the Krampus in the first two weeks of December, particularly on the evening of December 5th, and administer corporal punishment with a birch rod. Images of Krampus usually show him carrying away naughty tykes to the bowels of Hell. How can a truly benevolent Santa allow this to happen? The old boy had yet to be commercialized into the symbol of consumption when the mythic Krampus was conceived.

Krampus in many Alpine European towns, the celebration of St. Nicholas Day would not be the same without a celebration on its Eve, December 5th, honoring this dark servant. 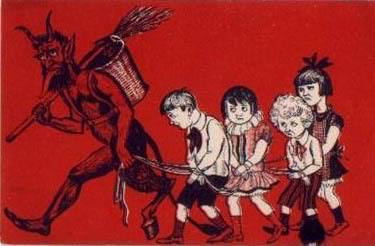 Originating in Germanic folklore as early as the 1600s, Krampus is believed to be a beastial creature who accompanies St. Nicholas on his earthly journey. While St. Nicholas rewards the good children with gifts and sweets, Krampus dispenses punishment to the wicked children who have strayed from the path of good. It is said he takes care of St. Nick’s “naughty list.” Why, the mere sight of Krampus alone is enough to turn any wrong-doer toward more peaceful pursuits. 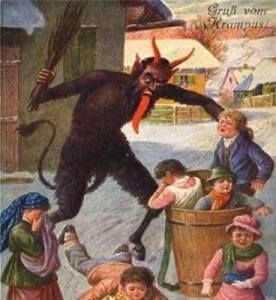 The name Krampus is derived from the Old High German word for “claw.” This towering, seven foot tall, hairy creature is depicted as having bulging eyes, a whip-like tongue, pointed ears and horns atop his head. He carries a pitchfork or, more traditionally, a bundle of birch switches, to menace children as he travels through town on a pair of mismatched feet: one cloven hoof, the other a bear-like claw. Wayward children caught by Krampus are spanked, whipped and even shackled to be spirited away in either a basket or barrel to Krampus’ lair. Once there they receive further punishment until they are repentant. 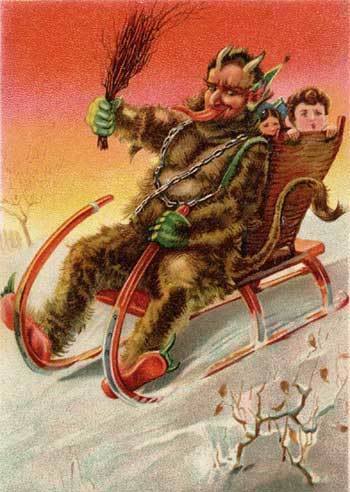 Krampus festivals throughout Alpine communities kick off the holiday season with townspeople dressing in Krampus costumes, running rampant through the streets and putting a scare in the youngsters. After the children have been given a proper fright to ensure they stay on the straight and narrow, the rowdy Krampus are rewarded with holiday spirits, traditionally beer and schnapps. In fact, Krampus celebrations have become so popular that they can last for days before the arrival of Saint Nicholas on December 6th.”

2 thoughts on “The Dark side of Christmas: Or the Curious truth about St Nickolas and his Demon Servant Krampus. (Part 1): KRAMPUS An offering of children Sacrifice?” Leave a comment ›