Dr. Jeffrey Bradstreet a respected and trusted health care professional whose son at 1 years old developed brain damage after receiving an MMR vaccination, which compelled  Dr. Bradstreet to research the connection between vaccinations and autism. After discovering the correlation of the two, he testified before Congress not once but twice. Dr. Bradstreet than starting working with a protein compound called “Gc-MAF” which is a protein that the human body produces naturally, which uses vitamin D to empower macrophages (Cell-eating) that the leukocytes (white blood cells) of the human immune system utilizes to fight off infections and disease. Gc-MAF was being produced at a medical laboratory in Switzerland as treatment for autism, cancer, and a host of other terminal diseases. The treatment of Gc-MAF was actually curing 90% of diseases, and the other 10% of extreme cases of disease was reduced tremendously.

Dr. Jeffrey Bradstreet became “missing” back in June 2015, and was later found dead from a gunshot wound in the chest face down floating in a river in North Carolina, Dr. Bradstreet lived in Florida. The local law enforcement quickly ruled it a suicide, despite Dr. Bradstreet’s family declaring foul-play and attesting that Dr. Bradstreet was not in the least suicidal.

Dr. Nicholas J. Gonzalez who “focused a lot on holistic alternatives to radiation and on exposing the dangers and destructive history of the more than 100 chemotherapy drugs, revealing that they were developed from poisonous nerve gas.” Dr. Nicholas J. Gonzalez is well known for treating the “Three’s Company” actress “Suzanne Sommers” for cancer and after his treatments of Gc-MAF helped her beat it.  One month after the mysterious death of Dr. Jeffrey Bradstreet, Dr. Nicholas J. Gonzalez a New York based physician who was in excellent and outstanding health, suddenly and mysteriously “collapsed” and died which was listed in the medical report as “myocardial infarction” (heart attack), however the autopsy performed on him showed that his heart was healthy, and no signs of heart disease whatsoever. 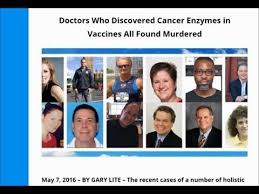 There has been a string of holistic doctors, performing “alternative treatments” who has been found dead or “missing” shortly, one right after the other:

Dr. Bruce Hedendal and Dr. Baron Holt found dead on the East coast of Florida. Dr. Hedendal died in his car and Dr. Holt’s cause of death has yet to be officially determined.

Dr. Patrick Fitzpatrick, MD, goes missing without a trace. His truck and trailer were found on the side of the road.

Lisa Riley, Doctor of Osteopathy, found in her home with a gunshot wound to her head.

Dr. Ron Schwartz found murdered by a gunshot wound to the chest in his home on the East Coast of Florida.

Dr. Abdul-Karim, holistic dentist. Found dead on the side of the road at 10pm EST.

Dr. Jeffery Whiteside is found dead in Door County with a .22 caliber close to his body.

Dr. Mitch Gaynor is found dead outside his country home outside of Manhattan where he practiced. The local sheriff quickly calls it a suicide.

Dr. Marie Paas is found dead of an alleged suicide.

Dr. Jerome Block “jumped” to his death from the Central Park West Apartments.”

The interesting thing that connects all these “Holistic Medical Doctors” is that they all have been researching and treating patients with Gc-MAF (Globulin component Macrophage Activating Factor).

Gc-MAF macrophage activation therapy is indicated in the treatment of any diseases where there is immune dysfunction or where the immune system is compromised, as in:

And perhaps many more health conditions.”

“One of the things that Gc-MAF does is kill a protein made by all cancer cells called nagalase, which is excreted by cancer cells to disarm the human immune system. Nagalase causes immunodeficiency. It seems that most of the doctors who recently died mysterious deaths were connected to treatment practices that employed Gc-MAF to defeat the effects of nagalase and successfully boost the immune system’s ability to fight certain diseases.”

“Dr. Bradstreet found that autistic children tended to have a highly elevated level of nagalase in their blood. He claimed to have tested over 400 autistic children for the viral marker nagalase, and found that close to 80% of them had significantly elevated levels. This would make sense as part of a dumbing down and depopulation agenda as described in THRIVE (at 1:33:55). Bradstreet treated 1,100 patients with GcMAF, with an 85% response rate.” Now he’s dead and the medical laboratory in Switzerland was raided by government agents and shut down.

“As contrary as it is to how they are promoted, vaccines have been proven to be an ideal mode of transmission for covert purposes, including spreading clandestine sterilization and fatal illness. The World Health Organization, UNICEF, and the U.S. Centers for Disease Control have been caught over 30 times covertly attempting to sterilize the birth age girls and women of various populations in Africa, Mexico, South America and the Philippines. Recently in the Mexican town of La Pimienta, 53 children were vaccinated for tuberculosis, rotavirus and hepatitis B — the same strains targeted by U.S. vaccines for children. 75% of the town’s children ended up in the hospital or dead.”

“The suppression of treatments and cures developed by Royal Rife, Rene Caisse, Harry Hoxey, and Max Gerson. These holistic practitioners, and others are being harassed, threatened, covertly radiated with ELF waves (Extremely low frequency electromagnetic radiation), and who have had attempts on their lives.”

According to Health Nuts News in March 12, 2016 Erin Elizabeth reported in her “Holistic Doctor Death Series: Over 60 Dead In Just Over A Year” Erin Elizabeth’s investigative reporting on this topic spearheaded this topic of the cover up and the murder of these lifesaving doctors, and should be commended and many other bloggers and websites that have and will be covering this targeting of holistic and alterative doctors and health care providers!

David Wolfe in his blog reported in September 2015: “29 Holistic Doctors/Practitioners Found Poisoned, Some Nearly Dead. Another Attack on Alternative Medicine?”

“Authorities in Germany are still trying to determine how 29 people were simultaneously drugged with toxic doses of amphetamines. Some left nearly dead, as rescue crews hurried to save their lives. According to a report from US News, the incident took place at a homeopathic conference on Saturday in Handeloh, Germany. At 2:25 p.m., an emergency call for help was placed at the convention center, and within 90 minutes, 150 first responders arrived at a horrifying scene. 29 people—who reportedly practice holistic and naturopathic medicine—were found in varying states of agony. The victims, aged between 24 and 56, were “suffering from delusions, breathing problems, racing hearts and cramps, some in life-threatening conditions, according to the public broadcaster NDR. According to reports, the victims of the mass-poisoning were described as “alternative and homeopathic practitioners.” And this is where this story becomes particularly unsettling.

Although complete details on the incident are still pending, this massive threat to the lives of holistic doctors and naturopaths prompts concerns about a potential deliberate sabotage. Especially in light of recent events involving the mysterious deaths/disappearances of well-known alternative doctors.”

“An enzyme protein produced by cancer causing cells, called “Nagalase” is being added to vaccines which are being given to humans. Nagalease prevents vitamin D from being produced in the body, which the body needs to destroy cancer cells.” This is being done intentionally, and the doctors that have been murdered were ready to go public with this information. The laws are made that all children must be injected to attend school.” (Jack Murphy, 2017) Neon Needle.com.

I urge my readers to investigate, research and be aware as these facts unfold for this is not just about doctors, but about us all as a people. Stay well and stay informed! 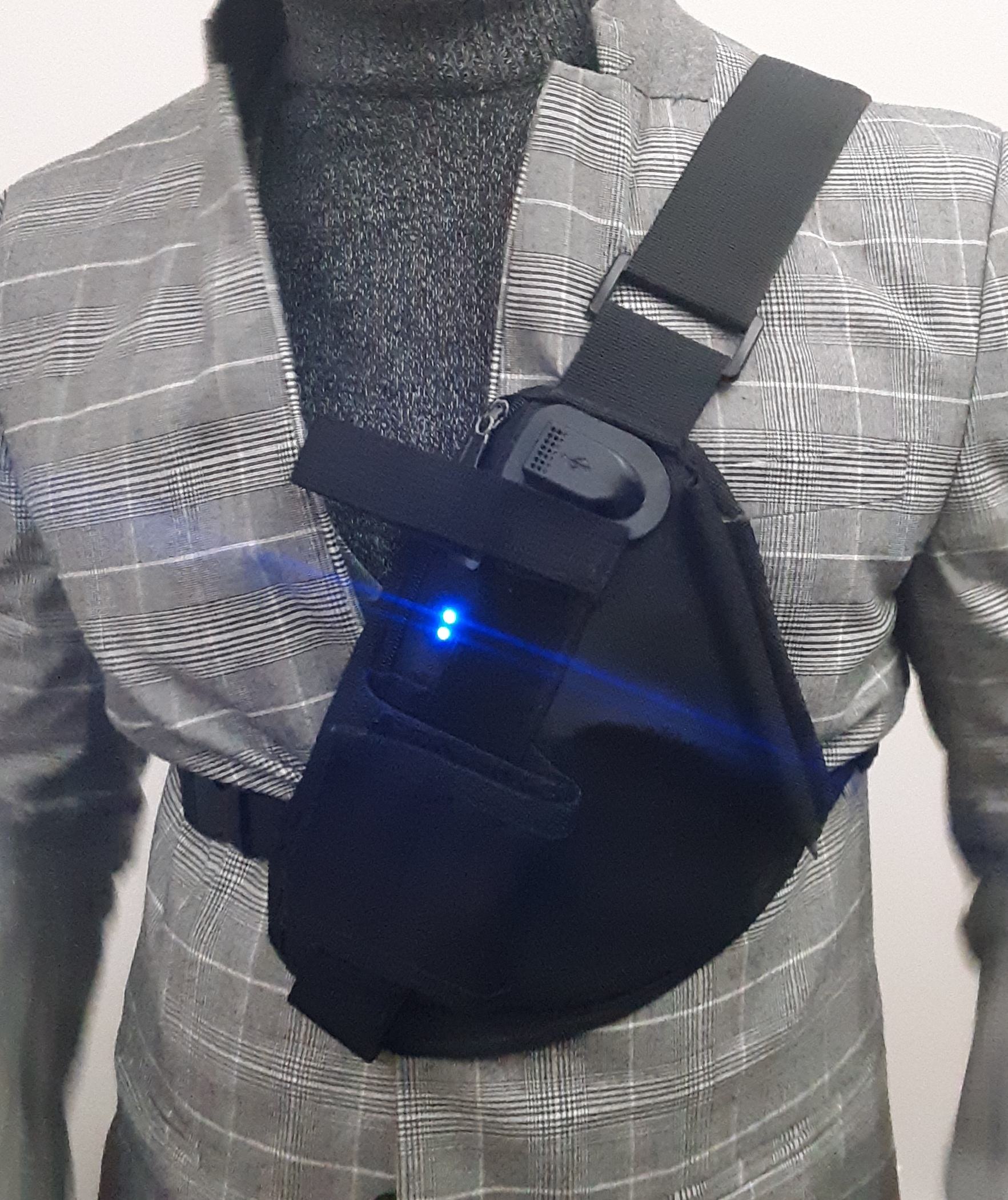