Atrial fibrillation is a common type of arrhythmia, which is a problem with the rate or rhythm of the heartbeat. This condition often has a very fast and irregular heart rate which can cause poor systemic blood circulation to the body. When atrial fibrillation occurs, the atria’s beat is irregular with chaotic heart rate patterns, and are out of synch with the ventricles of the heart. Atrial fibrillation (AF or A-fib) occurs if rapid and uncoordinated electrical impulse signals cause the atria to “fibrillate”, which mean to contract very rapidly and irregular; when this happens, the blood pools in the atria and isn’t pumped completely into the ventricles, which results in the upper and lower chambers working out of synch. AF may be either occasional, which is called paroxysmal Atrial fibrillation where symptoms come and go at random for a short period lasting for up to a few minutes to a few hours, or chronic, in which symptoms are ongoing and last for years as the heart rhythm is always abnormal.

Before we examine the possible causes for AF we must first understand that in Atrial fibrillation, the atria experience abnormal and chaotic electrical signals which make them “quiver”. The AV node is overloaded with electrical impulses attempting to travel to the ventricles which are also beating very fast, but not as fast as the atria. The resulting effect is, the
heart rhythm is irregular and very rapid. Being that the regular heart rate is 60 to 100 beats per minute, in atrial fibrillation the heart rate may range from 100 to 175 beats per minute.

Damage or abnormalities to the heart’s structure are the most common causes of atrial fibrillation, as well as infarction of the Atrial myocardium, Mitral stenosis and rheumatic heart disease, however other possible causes of AF include: High blood pressure, myocardial infarction, sick sinus syndrome (functioning of the heart’s natural pacemaker), emphysema or other lung diseases, viral infections, congenital heart defects and sleep apnea. Please note that some people who suffer from AF do not have any heart damage or defects, which is a condition called lone atrial fibrillation. The cause of this atria fibrillation is unknown, but serious complications are rare.

Atrial fibrillation (AF) causes the heart to beat inefficiently and usually causes the ventricles to depolarize faster than normal, as a result of this the ventricles cannot fill completely with blood, as such they might not be able to pump enough blood for adequate systemic and pulmonary circulation, this can cause signs and symptoms such as: Palpitations, which are sensations of your heart skipping a beat, a racing or beating too hard or too fast, irregular heartbeat, a fluttering or flopping in your chest. Decreased blood pressure, weakness, confusion,
Chest pain, dizziness or syncope, shortness of breath and fatigue.

The diagnosis of atrial fibrillations is determined by medical and family histories, a physician will perform tests and procedures such as: Electrocardiogram: to measure the electrical impulses given off by the heart. Echocardiogram: in which sound waves are used to produce a video image of the heart. Holter moniter: a portable device that that records all your heat rates as you wear it under your clothes, and records the electrical activity of your heart as you go about your normal day to day routine. Blood tests: This will help your doctor determine a thyroid problem or other agents in the blood that may cause atrial fibrillation. Event recorder: a device. similar to a Holter moniter save for the fact that not all of the heartbeats are recorded. Of the two types of this device, one uses a phone to transmit signals from the recorder while symptoms occur, and the other is worn all the time for a month or longer. 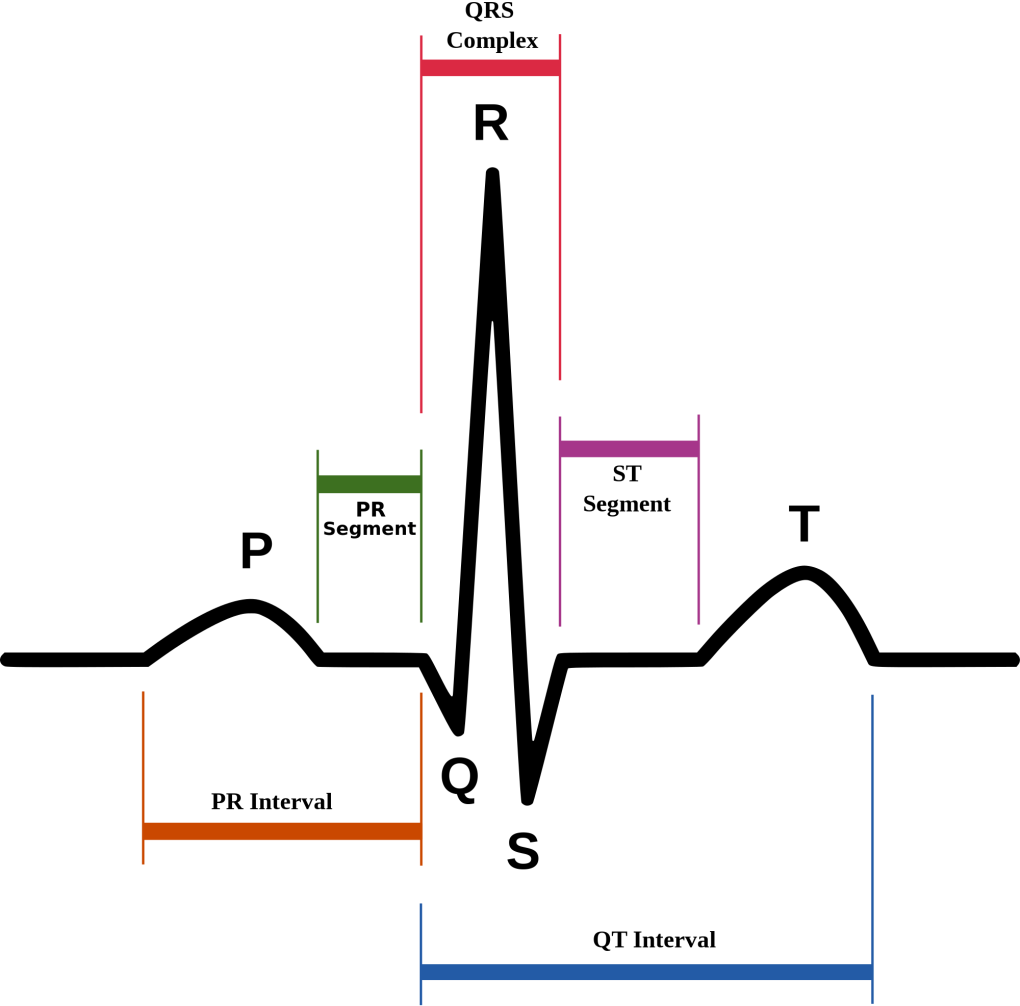 As with all heart diseases, complications may present. Because the atria is not depolarizing completely, blood will begin to pool in the upper chambers and there is a danger that a thrombus or blood clot can form, which in turn can develop and send an embolism, which is a traveling blood clot into the systemic blood circulation, and move on to the brain or lungs which in turn can cause cerebral vascular accident (CVA), renal infraction, pulmonary embolism, and myocardial infarction (MI) or death as there is no way to tell where the embolism will travel to cause severe damage or instant death. 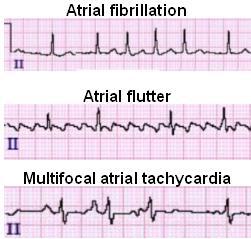 The treatment of atria fibrillation can take many forms and depends on various factors concerning ones health such as the underlying cause of the atrial fibrillation, and if you are able to take certain medications, however the two main goals of treatment are too prevent blood clots and reset the rhythm to control the heart rate which is called cardioconversion. Treatments using cardioconversion attempts to reset the heart rate or rhythm with the use of medications called anti-arrhythmics to restore sinus rhythm with can be administered either orally or intravenously.
Electrical cardioconversion is procedure that is brief utilizing an electrical shock to the heart using patches or “paddles” put on the chest of the patient which stops the electrical impulses of the heart for a moment in hope that when the heart starts to beat again, it will return to a normal sinus rhythm. The patient is sedated as not to feel the electrical shock. Patients after a post electrical cardioconversion procedure are often prescribed anti-arrhythmic medications to prevent the return of atrial fibrillation. The most common medications given are: Amiodarone (Cordarone, Pacerone), Dronedarone (Multaq), Proafenone (Rythmol), Solalol (Betapace), Dofetilde (Tikosyn) and Flecainide (Tambocor). Some side effects of these drugs include fatigue, dizziness and nausea.

Some cases of Atrial fibrillation cannot be converted to a normal sinus rhythm, so the next treatment is to slow the rate back within the range of 60-100 beats per minute, which is called heat rate control. Heart rate control is attempted in two ways, by medications such as digoxin (Lanoxin). This controls the heart rate while at rest, but not so well while being active. Some patients require other medications like beta-blockers or calcium channels blockers, angiotensin-converting enzyme (ACE) inhibitors that are sometimes used to treat hypertension.
If medications are ineffective or if severe side effects occur, Atrioventricular (AV) node ablation may yield results. AV node ablation applies “radiofrequency” energy to the connecting pathway of the upper and lower chambers of the hearts AV node using a long thin catheter to destroy the small area of tissue there to prevent the atria from transmitting electrical impulses to the ventricles, a pacemaker is required to establish a sinus rhythm as well as blood thinning medication to reduce the risk of stroke as the heart is still in atria fibrillation.

The prevention of atrial fibrillation can be facilitated in many forms. Avoiding binge drinking, eliminate or reduce caffeinated drinks. Also being cautious when taking over the counter medications containing stimulants, like pseudoephedrine which can trigger atrial fibrillation or when taking anti-arrhythmic drugs that can cause adverse interactions.
In conclusion maintaining a healthy lifestyle is the key to preventing any type of health problems. Promoting a healthy heart includes limiting your intake of salt, quit smoking, eat a healthy diet rich in heart healthy foods, lots of exercise, following your doctor’s suggestions and or medication prescriptions on lowing your blood pressure.