Harlem’s classy new lounge/music venue/speakeasy Gin Fizz Harlem marks the return of exciting elegant night life on Lenox Ave. This upscale venue is styled like the old fashionable speakeasies from the 1940’s with a touch of pure elegance!

The owner David Chevreux has much to be proud of. After David’s father secured the space right upstairs from Chez Lucienne between 125th & 126th Street and Lenox, and expressed that he wanted to open something “young and chic”, David pulled together his own money and approached his dad and said “I want to be part of this” and invested with his father as a partner.
Taking only six months to set up, by the end of March 2015 Gin Fizz opened its doors.
Two months later, David took over the reigns as sole owner, and didn’t look back. David Chevreux’s mission was simple, “I want the best live music in Harlem that’s both hip & cool.”
This young entrepreneur’s vision is now a stark reality!

When asked what his is most proud of about his hip Harlem club, David replied: “Most of all I’m proud of my Staff!” “The one’s that stood by me through all the storms”; at first David was unsure about the clientele  coming in. Now his enforced dress code of “Men with jackets” or stylishly dressed, and “Women’s chic” ensures the direction of this soon to be famous Harlem venue.

The maitre d’ Devon heads up a lovely host of waitresses, all stylishly dressed and gorgeous!

Adreena, Kristina,Tiffany and Christina Corrad are leggy and lovely waiting to take your order.

The bartenders Asa and Naira serves up specialty drinks, like the “Gin Fizz” (of course) and the “Spicy Thing” as well as a host of others that will keep you in good spirits indeed (no pun intended). My favorite drink is the “Le Mac”(formally known as “The Classy Gentleman” as if you didn’t know).

Gin Fizz, has in such a relatively short time has built a reputation for showcasing the most brilliant Jazz Artists and exciting new comers. Such as the Great recording artist, “Mark Cary”, and the soulful Noel Simone Wippler & the band of friends (“that shuffle”). My favorite night at Gin Fizz is Thursday night, The Harlem Sessions hosted by Mark Cary is not to be missed on that night, after one set, you’re staying this to the end. The talented and engaging Mr. Cary gets down like that! Saturdays you can dance and grove to the spinning’s of celebrity DJ’s Like “Antoine DeBrill” 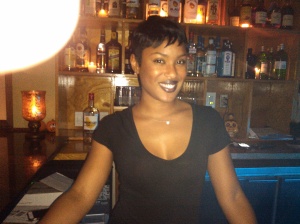 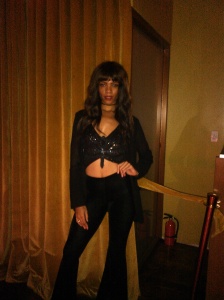 The stylish waitress Adreena Thompson ready to greet you.