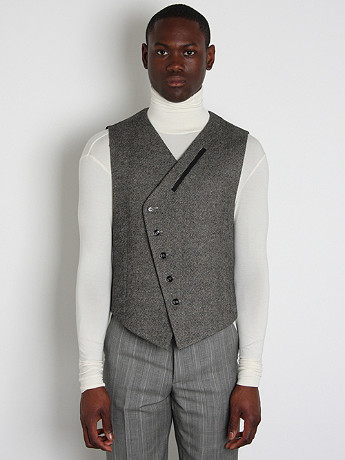 A BRIEF HISTORY OF THE WAISTCOAT PART 2:
In the time of Queen Victoria, Prince Albert (her consort) started a fashion statement with his small waist. Wearing his vests tight and tapered which gave him a striking look that all the gentlemen started to emulate in the early 19th century. Around the 1850’s a straighter line, with less restriction at the waist was the change of style. The notion of leaving the last button on the waistcoat undone, as well as on blazers and suit jackets, stemmed from King Edward VII while Prince of Wales: “His ballooning waistline caused him to leave the bottom button of his waistcoat undone. To his subjects, he was a style-icon and they took up the habit.” Another practice of undoing the lower button was to stop the waistcoat from riding up when on horseback.

Many stylists insist that men wearing a suit jacket should leave the last or “bottom button” undone, without even knowing where the practice originated from and why. So if you do not have a “Beer Belly” or plan on riding to work on horseback, feel free to button the last button on your blazer if you wish, instead of blindly following people who dole-out fashion do’s and don’ts, but fail to correctly explain the why’s, how’s and when’s, because of the lack of knowledge or understanding of the history of certain men’s fashion treads.

Before the advent of wristwatches becoming popular, “A gentleman would keep his pocket watch in the front pocket of his waistcoat, attached to one of the buttons with a fob and watch-chain.” This arrangement is still worn by Elegant Classy Gentlemen.